Services of the Wellesley Amish Mennonite congregation are reported to have begun in 1859 when bi-weekly services were held in homes. The first bishop was John Jantzi. A small frame building, which was used primarily as a funeral shelter, may have been erected  as early as 1867 on the site of the present cemetery on the 3rd Line. The north  halves of lots 11 and 12 were purchased by Leonhard Streicher from Samuel and Margaret McKee in 1869. The next year, on July 11, 1870, Streicher deeded a half acre of property to the Amish Mennonite congregation on which a cemetery and "funeral chapel" were to be located. The chapel was built during the years 1871-1872. Worship services continued to be held in homes, although services at times may have been held in the funeral chapel.

When a larger church building was erected in 1886, some members of the congregation began to hold regular services in it, while other members continued to meet in homes. Members of the latter group, of Old Order Amish, are members today of either the North or South Church District of the Amish Church. The members continue to meet in homes; there are no meeting houses. Those members who met in the church building were led by the bishop Jacob Wagler, Joseph L. Lichti and Christian B. Zehr.

A division occurred later in the group which had continued to meet in the 1886 meeting house. In 1911 or 1912 Jacob F. Lichti (bishop) and John Gascho (deacon) and a number of other families left to form another church. It became  known as the Lichti Church, but is now known as the Cedar Grove Amish Mennonite Church. Christian B. Zehr was ordained bishop in the Wellesley congregation after the Lichti group left. Wellesley was sometimes referred to as the Zehr congregation, but it is now known as the Maple View Mennonite Church.

A Sunday School was begun in 1912. A new frame church was built in 1928, and it was also at this time that it was named Maple View Mennonite Church. In 1933 Sunday School began to be held every Sunday before preaching services. The church building was enlarged in 1976; at the same time the sanctuary was removed and the exterior of the building was covered with white siding. Additional land for the cemetery was purchased on January 11, 1984.

Of interest: Crosshill Mennonite Church, located in Crosshill in the former Presbyterian (later United) Church is a daughter church of Maple View. The Crosshill church building was purchased from Wellesley Township Council in 1949. Services were conducted by the Maple View ministers until 1967 when Stevanus Gerber, ordained in 1966, was stationed here. Sunday services were held jointly by Maple View and Crosshill until 1981.

Records:
For information regarding the availability of any early records, please contact the Archivist at Conrad Grebel College, University of Waterloo, Waterloo, ON N2L 3G6. 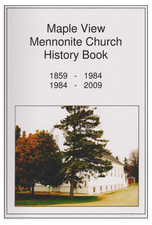 It was written to "commemorate the 125 years of church fellowship in the Wellesley congregation, now known as Maple View Mennonite Church."

We also have a large collection of digital photos taken inside and outside the old church building after it was replaced with a new building in 2010.